You’ll know you’ve arrived at the right place for your tattoo apprenticeship when you spot our building and its awesome mural. Our shop is filled with amazing art and our talented artists are sure to inspire you to become a tattoo apprentice!

If you are serious about a career as a professional Tattoo Artist, we will consider mentoring you through your tattoo apprenticeship from start to finish. Our mission is to ensure equal opportunity in the tattoo industry, for artists who are dedicated to becoming great Tattoo Artists and even better humans. And we're looking for artists from all walks of life who want to learn the art of tattooing and the craft of client relationships.

We are proud to offer our Tattoo Apprentices something they can only count on if they complete their apprenticeship at Body Art & Soul Tattoos:

How to Become a Tattoo Artist in Brooklyn

Our New York Tattoo Apprenticeship is only for people who are serious about changing careers, or transforming their lives, and becoming exceptional Tattoo Artists. We are fortunate to have developed a small handful of Tattoo Artists who are willing and able to train future apprentices in a safe, structured environment, that works.

Once in our New York tattoo studio, you’ll be trained to implement impeccable tattoos on clients, while gaining the skills, work experience, and professional development you need to launch your career as a tattoo artist. Apprenticeships generally take 1 year to complete.

1. Interview with an Advisor

Learn more about our tattoo apprenticeships, what it takes to be a successful tattoo artist, and our Guaranteed Job Offer by speaking with an Advisor.

2. Start From Home - Finish In Our Studios

Upon completion of your full apprenticeship program, we welcome you to tattoo at one of our exceptional tattoo studios. You will have all the skills necessary to provide quality custom tattoos with world-class customer service to your clients.

Want to get inspired? Check out our shop's Instagram @bodyartsoul to see tattoos from our team. Once you explore the feed, we're sure you'll be interested in joining us to work on your own tattoo portfolio!

Get INKspired by Our Artists' Stories

At the Body Art & Soul Tattoos Brooklyn studio, we Ink Different® by treating every artist and every client with care and respect. We hope you get inspired to join us after you watch some of our artists' stories. 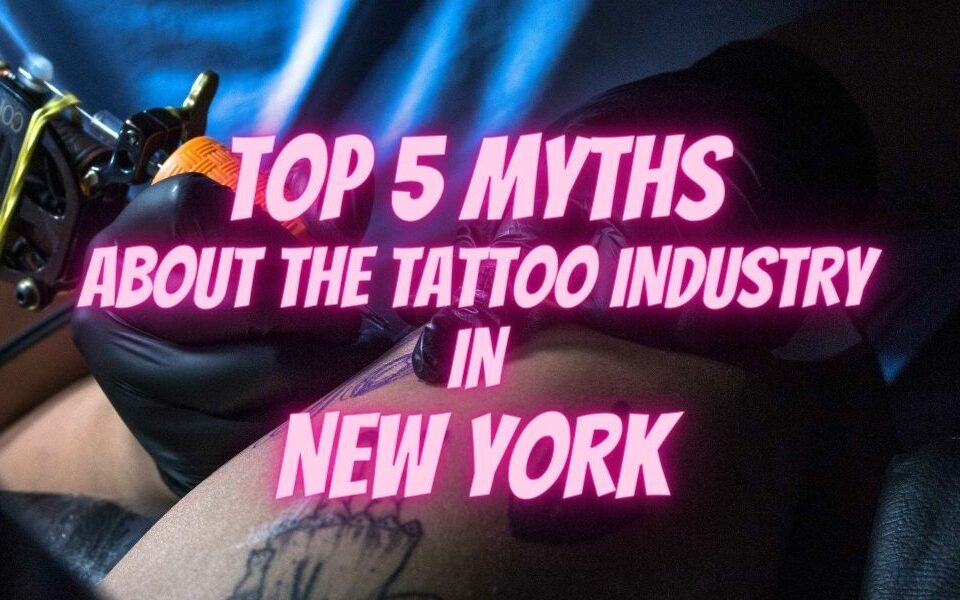 Top 5 Myths About The Tattoo Industry In New York Busted

Lies You Were Told About The Tattoo Business That Prevented You From Following Your True Calling   If you are an artist of some kind and have a few tattoos of your own that you absolutely love, you might have thought, ‘Hey, I should become a tattoo artist in the tattoo industry in New York!’ Many tattoo artists were formerly art students. It’s very common to get your start in other mediums before moving to a human canvas. You probably knew you wanted to be an artist since you were a young child. You just probably didn’t realize the best […]
Do you like it?1
Read more 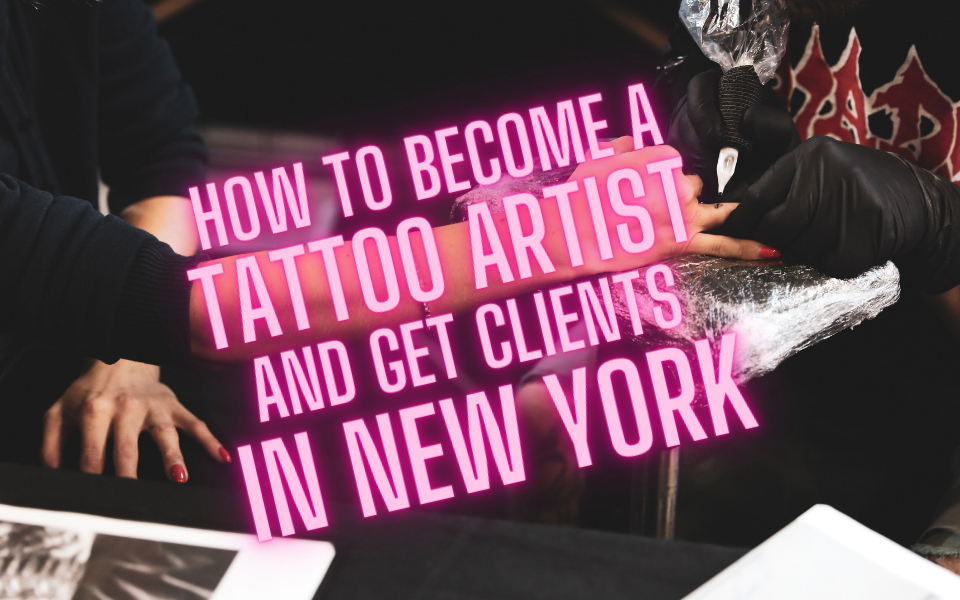 From QR Codes, To Social Media, To The Real World, Everything You Need To Know To Start Your Career As A Tattoo Artist In New York And Get Clients Quickly The tattoo industry is exciting and currently flourishing. The demand for new Tattoo Artists is high even though there are so many talented artists in New York City. In order to get started in the tattoo business, you must work on getting proper tattoo training, get a tattoo mentor, develop your own tattooing style, create an online presence using social media and believe in working towards the best job opportunities […]
Do you like it?0
Read more 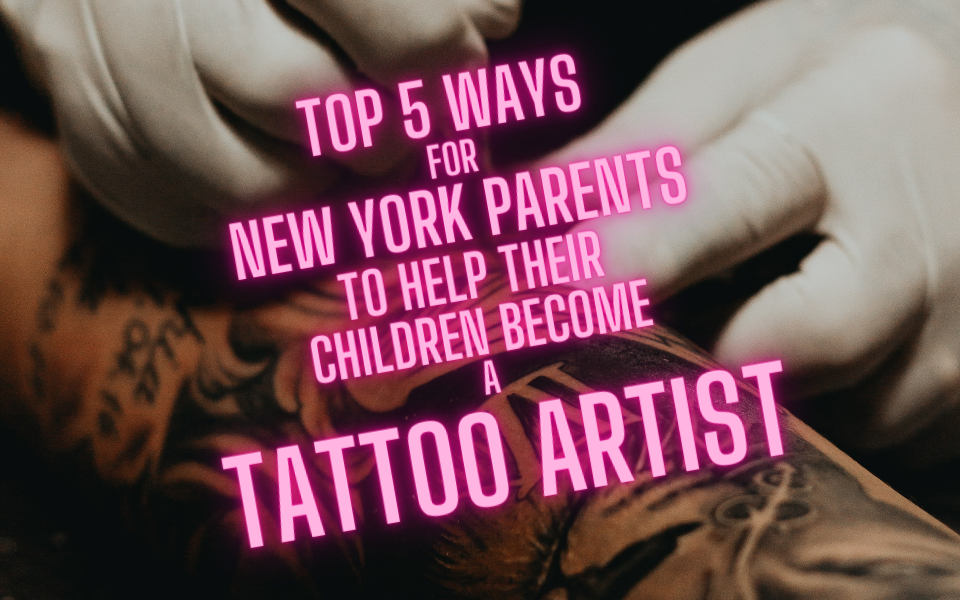 Everything Parents Need To Know When Their Child Wants To Become A Tattoo Artist in New York Are you a New York parent interested in helping your child become a Tattoo Artist? If so, we understand you might be finding yourself in unchartered territory. If your child grew up in New York City, or lives in New York State and visits NYC, then your child has been exposed to the experience of being surrounded by art for a very long time. From sophisticated architecture to beautiful street murals and from high-end galleries to world-famous tattoo shops, New York is known […]
Do you like it?0
Read more 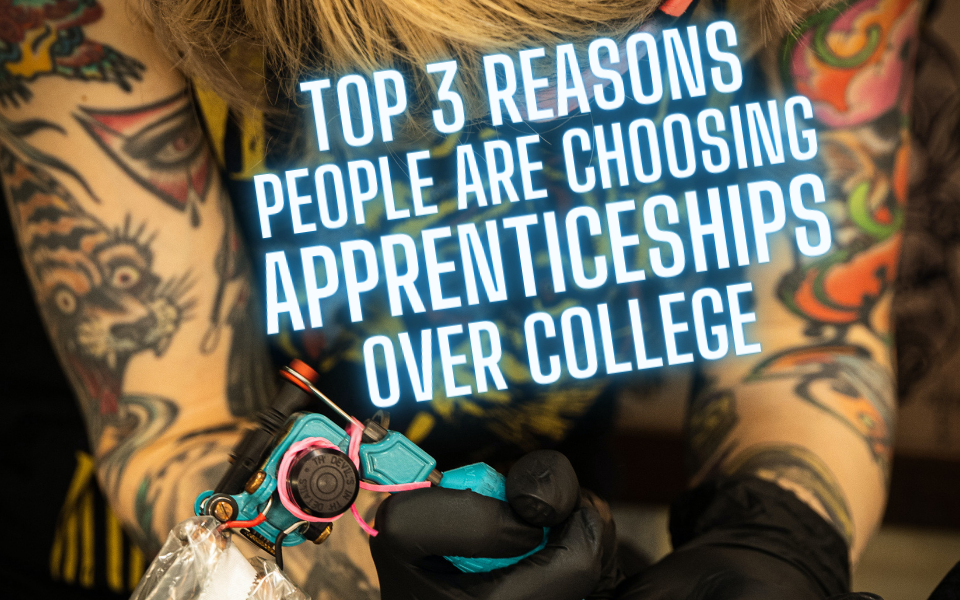 Making A Living From Your Art Does Not Require 4 Years Of Your Life And A Lifetime Of Debt. Every fall we experience a wind-up of activity and pressure we call “back to school,” yet with the insane cost of a four-year college degree, many artists and their families are asking, “is college worth it?” Choosing apprenticeships over college has started to look like a smart decision for many. For people considering how to become a Tattoo Artist as a way to make a living from their art, choosing a Tattoo Apprenticeship as an alternative to a college education is […]
Do you like it?3
Read more 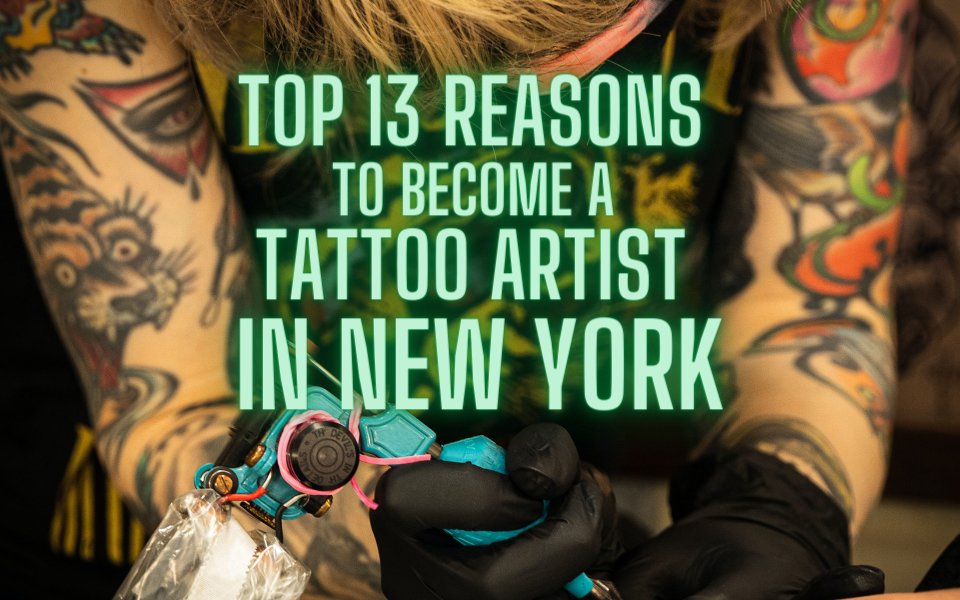 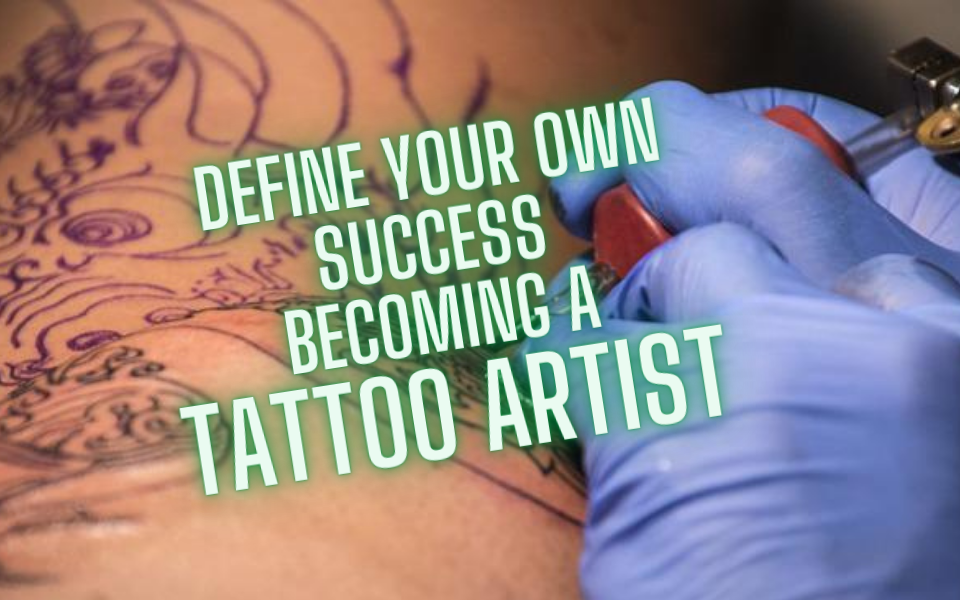 The Only Guarantee You’ll Ever Need to Become A Tattoo Artist “The Saddest Thing In Life Is Wasted Talent” – Robert DeNiro, A Bronx Tale. We know that becoming a Tattoo Artist and trying to figure out how to become a Tattoo Artist is front-and-center on a lot of people’s minds. We also know that making a career change at any stage in life can be scary. But what’s scarier than a life filled with regrets? Fortunately, you can learn here how to get q Guaranteed Job Offer when becoming a Tattoo Artist. Let’s face it, you were born with […]
Do you like it?1
Read more

Why Become A Tattoo Artist in Brooklyn, New York?

Have you considered changing careers and becoming a tattoo artist in New York? Of course, you have! That’s why you’re here.

Let’s talk a little bit about why that is such a good idea.

Yes, we’ve all heard about the days of Soho and the artist lofts and times when NYC was so much rougher around the edges. Well, guess what? All the artists have moved to Brooklyn!

Manhattan pricing is insane. We hope one day that you can afford $5000/month for a one-bedroom as a successful tattoo artist, yet why start there when there is so much inspiration in Brooklyn!

One fun tattoo fact, did you know that in 1891, New York City tattooer Samuel O’Reilly patented the first electric tattoo machine, a modification of Thomas Edison‘s electric pen? Yep, so you could almost say that modern tattooing was invented in New York!

While most tourists immediately fall in love with NYC, tattoo artists know to hope the L train to Bushwick, Williamsburg, and East Williamsburg. These areas have become the hub of art in New York. Of all New York’s boroughs, Brooklyn took over the title of “Center of Arts & Culture,” once Soho, the East Village, and Alphabet City got too expensive for any up-and-coming artists to live there. Now we can totally fight about the existence of East Williamsburg vs Bushwick, yet we’ll save that for another day. Either way, that’s where Body Art & Soul Tattoos is located, and there’s good reason for it.

Often viewed in the past as Manhattan’s younger, less accomplished sibling, the truth is that those who actually live in Brooklyn are probably never leaving. There has been a significant influx of creative people moving to Brooklyn over recent years because this is where art lives in the five boroughs.

Did someone in your in life mention the street art they saw when visting? Well the they we were most definitely speaking about Bushwick. Bushwick, a neighborhood in Brooklyn, New York, is one of NYC’s most colorful and street art-filled areas. Strolling through Bushwick, you’ll notice its changing. The wholesalers and auto body shops that once dominated this working-class neighborhood are now home to zero waste stores, craft beer bars, tapas restaurants, and street art! 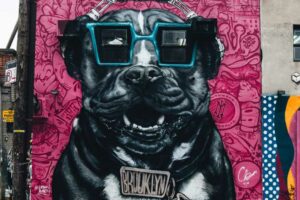 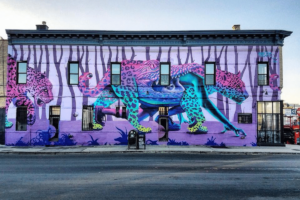 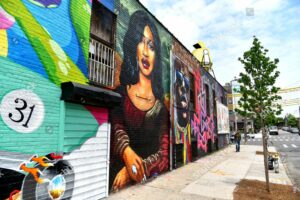 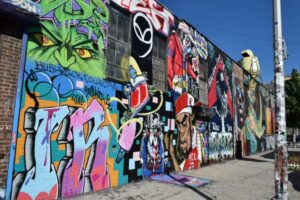 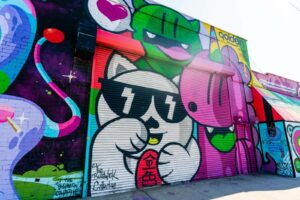 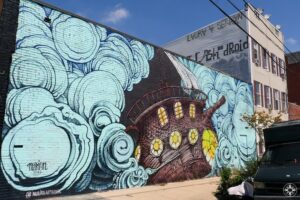 The Bushwick Street Art Collective works with local artists, business owners, and the community to find locations for street art. They also throw a party every summer, the Bushwick Open Studios, which is like a massive block party that includes free entry to artists’ studios throughout the neighborhood.

Being a foodie is a real thing, and East Williamsburg and Bushwick are now full of delicious, well-known restaurants, including Rebel Cafe & Garden known for its tacos and awesome patio. It also happens to be right across the street!

Some of our other favorites include Sea Wolf known for its amazing seafood, Roberta’s (right down the block from Body Art & Soul Tattoos) known for its pizza, Dock Asian Eatery, known for its Thai fusion.

As far as music venues go, Brooklyn is the best! Forget Madison Square Garden and head to Brooklyn Steel and Friends and Lovers if you want to see the artists that will one day pack MSG. Wild Birds is a little bit further from the shop than we’d like, yet Elsewhere is right down the street! Check out this list from Bklyn Designs for a good round-up, including Baby’s All Right, which we’re pretty sure our founder spent every weekend in when it first opened.

Everyone from Jay-Z and Biggie Smalls to Pat Benatar and Niel Diamond are from Brooklyn, so why can’t you do in tattooing, what they did in music!

Body Art & Soul Tattoos has been in Brooklyn for a long time, and we love it. We were in Bushwick before it became East Williamsburg. Are we dating ourselves? That’s probably a good thing right! We’ve been training and employing tattoo artists since some of you were in preschool.

If you really want to make a great living as an artist, then it’s time to get that tattoo apprenticeship through our tattoo school and join our artists all around the country who get to move between our shops, or move to cool new places like Los Angeles and Brooklyn!

Steps to Become a Tattoo Artist

1. Talk to Your Advisor

Learn more about our tattoo apprenticeships and what it takes to be a successful tattoo artist by speaking with an Advisor. The program can be tailored specifically for your schedule, no matter where you live.

3. Tattoo at Our Studios

Upon completion of your apprenticeship, we welcome you to tattoo at one of our exceptional tattoo studios. You will have all the skills necessary to provide quality custom tattoos with world-class customer service to your clients.

How Much Does It Cost to Become a Tattoo Artist?

The cost of your tattoo apprenticeship will vary depending on the program you choose. Complete this form to download our tattoo education guide and one of our advisors will follow up to discuss which program works best for you.