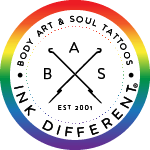 Our First Time Consulting on a Major Motion Picture

If you’re a tattoo enthusiast and haven’t seen Judd Apatow’s newest film The King of Staten Island, where have you been? See this movie!

The film stars Pete Davidson as an aspiring tattoo artist still in the early scratcher phase of his career, and is full of stars like Marisa Tomei, Bill Burr, and Steve Buscemi. Like any Judd Apatow film, the mix of humanity and humor runs throughout the film.

Given that Pete’s character is an aspiring tattoo artist, Body Art & Soul Tattoos was fortunate to get a call one day from Judd’s office asking for help with the film. What I personally found surprising and serendipitous, was that I had just shared with my cousin how I needed to get in touch with Judd Apatow, and literally ten minutes later our Los Angeles shop called to say that his office called us! Amazing!

A few phone calls back and forth and next thing we knew, our artists and apprentices across the country were doing their best to sketch funny scratcher tattoos, intentionally made to represent someone (Pete Davidson’s character) who had never had a tattoo apprenticeship and was fumbling around in an attempt to teach themselves how to tattoo.

Our artists and apprentices found it challenging to momentarily unlearn all their training, yet had a lot of fun working on the movie.

For some insider highlights of other things you may not have known about the film, check out this video made by Screen Rant, “25 Things You Missed In The King Of Staten Island.”

If you’re a filmmaker and need tattoo experts to make amazing or hilarious tattoos, we’re here for you.

If you’re an aspiring tattoo artist, then don’t be like Pete’s character and waste years doing terrible tattoos on your friends. In real life, terrible tattoos are not funny! Well… not on you at least, so reach out to us for a real apprenticeship.

Then go watch this movie!